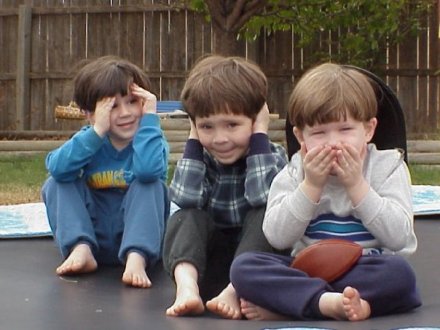 It is a personal choice if a witch wishes to teach their children magick. Some witches raise their children in the family practice of witchcraft and some do not. It is a very personal choice and should be made with an eye to the child’s future and what the parent considers best for their individual child, or children, in particular.

Personally, Az and I allowed our children to know that we were practicing witches throughout their lives; they saw us practicing magick from very early ages, before they could even speak. They were allowed to watch rituals performed and spells cast throughout their lives while their father was alive and I have continued the traditional after Az crossed over in ‘99. Had Az lived, I am certain there would have been some very intense arguments, as I know he was eager to teach them from a young age to practice. However, I felt it best to wait and allow them their own choices once they reached the legal age of majority.

As the years passed, they have seen me cast several different spells: on behalf of themselves in nightmare banishing rituals, on behalf of others in healing rituals, in protection spells cast on our vehicle while they were inside, and on behalf of the animals, we pass on roads who have lost their lives, etc. I have refused to hide what I am from them, and though I cautioned them to remain silent about my craft to others when they were much younger, (I explained the prejudice some feel and how it could affect our family) however, for many years now, they have had my permission to “out” me to their friends if they wish.

Others of our coven have chosen to raise their children in the craft. While I do not necessarily agree, I do respect their wishes and am currently in the works of crafting a new Yule ritual that will incorporate four of the children in the celebration as active participants. The children are eager to learn and as a result, they will take part in a limited manner suited to their individual ages.

If a person wishes to teach their children magick, there are many spells, which may be taught, depending upon their age, to help them increase their sensitivity in tune with their growing abilities. In the following weeks, I will be adding a few of the spells that I consider appropriate for children to the blog.

The first will be a spell that my children picked up from me, without my intention, which served them well in the intervening years. It is simple and it is the only one I have allowed my children to practice prior to reaching their age of majority.

Feel free to pass this spell and any others I share, on to your own children if you feel they are appropriate to your child’s needs.

Just to begin with let me state that a witch does not have to have a magickal, or so-called witch name, in order to practice their craft. It is purely a subjective choice for most witches. Some people choose a witch name because they are being initiated into a coven or group, which requires them to have one. Other witches choose them for secrecy sake if they live in an area where they do not feel safe coming out of the broom closet. Some others choose witch names as a way of signaling their rebirth to a new, spiritual path or a new mystical way of living. Whether you wish to choose a witch name, or practice under the same name your parent(s) gifted you with upon your birth and that you have had for decades, the choice should be yours.

As for myself, I choose the common name Treehugger, because I have been a treehugger since my very early youth, from what my family has always told me. I have a love and affinity for trees, which has been life-long and will never change. I think they are some of the most beautiful and wonderful creatures on the face of the earth. They are unique, long lived and by their very existence, they are making the world a better place for all breathing creatures that need the oxygen they create. They inspire me to remember that by my existence I should be striving to make the world a better place for my having been here.

My late husband, Azrael, gave the name Heather to me. He said that he believed that I was like the heather, which thrived and bloomed among the rockiest paths and in the midst of the most acidic soils, such as would destroy most plants. Yet even so, I thrived and bloomed in the household and family I had. He said that I was as delicate as the flowers on the heather and as hearty as the plant itself. That I would thrive no matter the circumstances because it is my nature.

When choosing a name, you may choose on your own, ask for help from others, wait for the inspiration from nature, seek a name from your deities, or even choose one via numerology and any other magickal means necessary. The most important thing is that you feel at home in the name, that you feel it suits you. If it does not feel right to call yourself by the name, then choose another. You are the one who has to live and practice your craft with the name, so make certain that you like the feel of it as it tumbles from your lips.

A few things to consider in choosing a name:

As with all things magickal take your time and do it right. There is no more rush to choose a witch name, than there is to choose a spiritual path. It needs to be right for you. It needs to speak to your souls as much as your path. As such, take the time to write down several words to choose from as portions of the name or even names as a whole to combine as you see fit. As you think of them, ponder them, meditate on them, combine and recombine them in various ways until you find the one that is right for you. Take a few out for a “test drive” as it were and use them aloud a few times to see how they feel. You will know the right name when you find it.