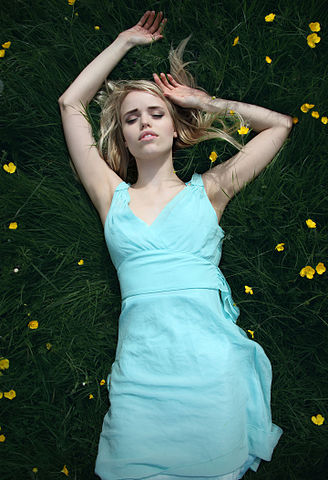 Other than my accidental journey, one of my first few trips, after learning how to control myself when I was astral, was experimenting with the flying capabilities that I suddenly had at my disposal. As with most people, I had wondered about how the birds feel when they fly through the air, so I was having a great time playing around.

I was using the trees as catapults of sorts. I would fly at them and grab one of the top branches that was sticking up and hang on until it bent way over to one side. Then, using the force of the branch returning to its natural place I would slingshot off again faster and faster. It was a blast.

When I got tired of playing with the trees, I started swooping and soaring, making huge ornate patterns with my flight. Suddenly, I realized that it had gotten a bit out of hand, when I looked down only to see the ground as it seemed a million miles away. I knew in that instant that something was wrong. I was hearing this extremely high whistling noise and the lights below me were getting larger than they were… much faster than seemed normal. “Oh My God… I’m falling.” was all I could think. I have a fear of heights, normally, so I reached my hands and feet out in front of me and began to chant “This can’t happen, this can’t happen, this can’t happen.” continuously while scrunching my eyes closed as tightly as I could. The high-pitched whine had my ears so sore that my whole head throbbed. I was terrified of what was going to happen.

Suddenly I felt something incredibly soft under my hands and feet and then there was pressure against them. I opened my eyes and saw that I had landed ever so softly and lightly into a beautifully manicured cemetery. It was small and had a house right next to where I had come down. I knew that it belonged to an old man who tended the place, because I saw him as he wandered about. I decided to go exploring. I saw that he had some clotheslines out in back where they were not visible to the cemetery because of his fruit trees. The trees were not very tall only 20-30 feet or so, but they were very bushy and as such, provide a great deal of privacy for him. His little cement porch by the back door was encircled with terra cotta planters and had all kinds of plants growing in them. Small ones with tiny little blue flowers to huge ones that looked like heavily stemmed herbs, some were almost like rosemary… but not quite the same. There was a radio playing softly beside the back door as if he had been out there earlier and he had forgotten to take it in with him as dusk began to set in.

The name on the wrought iron gate said it was the Cumin Cemetery. I have looked around a great deal over the years since and have never found it on a map, yet. I am curious to know where I was. All I know is that there was a very large airport near to it, because I passed it on my way out.

After coming back into myself, I had severe earaches for a few days after that trip. When I asked about my earaches, a casual friend, who is an experienced astral traveler, told me that my physical body had manifested the pain that I had experienced in my astral form as some kind of sympathy reaction. Shortly thereafter, the friend had to relocate for his job. As such, I have never discovered if there is a way to prevent these types of issues, though I am sure there must be.

Though I am not very well experienced in going astral, myself, I still want to learn more about it and explore it when I have the chance to do so. With me, it is all a matter of finding the time to do so and the peace and quiet necessary in a house with three teenage sons and their visiting friends.

What do you think? We are interested in your comments, feedback, questions and ideas! Cancel reply

This site uses Akismet to reduce spam. Learn how your comment data is processed.