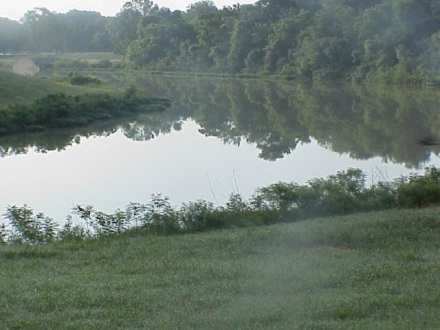 While the mood was still set from an unsuccessful, previous attempt, Nightshade decided to give it a go. Knowing my love for nature matches his own; he had me lie down, and then used nature to relax me into a deep trance.

I was in beautiful woods, there were trees all around me, and there was the sound of flowing water in the distance. I was strolling along the wooded area describing it and hunting for the water, I saw a large stream in the distance, it was glorious in its beauty, and then he mentioned a bridge, asking if I could see it.

I remember the shape of the bridge, it was wide and thickly made of roughly hewn stones placed together to form a graceful and steep arc over the water. It rose majestically and I knew I could see only to the center of the bridge, the far side was hidden from me by the steepness of the arc itself. I was doing great until he mentioned crossing the bridge. There was a bit of mist coming off the water and it started getting thicker as I approached the bridge. It became a full fog, which covered the area so thickly that I could not see well any longer. He guided me by sound to the bridge, as I stood at the base of the bridge I could see around my feet where the fog was less thick, more swirling and I could see the way the banks of the stream ended and the grass over hung the side down to the water’s edge a scant few feet below. Thinking of the incarnation when I had drowned I got a bit nervous, but as I stepped onto the bridge and felt the sturdiness of it under my feet, any fear of it collapsing and dumping me into the water proved baseless. I crossed slowly hearing the water below me, feeling the vibrations as it moved strongly against the supports of the bridge.

As I stepped off the far side of the bridge the fog was less thick, more roiling with patches of clear vision between them, but still nothing was truly visible. I wandered about in the fog, seeing snatches of foliage and nothing in entirety.

Nightshade asked if I could see the garden around me and asked me to explain what I saw there. I could see colors in the mists enveloping me and not much more but then suddenly a swatch of orange blossomed out of the mist and I clearly saw a beautiful flowering bush. The leaves were a deep dark forest green, long and somewhat thin, furry looking to my eyes and the flowers were perhaps 2 inches in diameter or so. Their petals were sharply spiked, almost star shaped from the center to the ends of the petals and a more vibrant and beautiful shade of orange I have never seen. There were other plants, bushes, and flowers as well but none so clearly seen.

Then he mentioned the fountain to me and I wandered over to have a look at it. The fog was still thick around me, but I could hear it and see snatches of it through the moving clouds of fog around me. I was approaching it and it was beautiful, a bit Gothic looking. I described the pool to Nightshade and the others. It was about 20 feet in diameter, and in the center was a fountain, which rose about 12 feet or so in the air. It was like a single stem of a flower and from about 8 feet high to just over mid way down the shaft of this “stem” there were long leaf shapes, which were very similar to those of the flower I had just seen. Thicker at the base and thin at the ends, gracefully molded in a smooth arc, water flowed from the base of these slowly and ran down the center of the “leaves” and off their tips back into the pool. The top of the pedestal was as a flower with all the petals stripped off, merely a ball at the end of the stem. The walls of the fountain were thick probably 18 inches wide and were roughly cut on the outside of the fountain. I got a feeling it was almost as if there were scenes cut into the stone itself, but I did not think to look closely at the outer walls at the time. They were mostly straight from the top of the pool wall to its base on the outside, but then as I sat on the smooth rim of the pool and looked at the inside of it, I saw the inside was more concave and as smooth as silk, solid gray stone. It was as if the entire thing were carved out of a single piece of stone.

Nightshade had me step to the wall of the pool, which were only two feet tall, yet the fountain seemed much deeper than just two feet, when I looked into it the water was waist deep. As instructed I sat on the lip of the fountain and tested the water with my hand, feeling the water which was the perfect temperature flowing against my skin. As I traced light patterns in the water, I was told to swing my legs over the side of the pool, so I did. The water against my bare feet and legs was so deliciously teasing, I was instructed then to ease myself into the water and lie back and float on top of the water. It was heavenly, so I was happy to oblige. Nightshade then allowed me to adjust to the silken caress of the water on my body and through my hair, putting me at ease, as a babe must feel in its mother’s womb. It was a safeness and security that I did not recall having ever felt before. There was lightness to my body that was impossible as I floated almost on the surface of the water.

I was drowning. I could feel the pressure on my chest and tried to get up but it was too great, I could only gasp out “I can’t breathe!”

Suddenly the entire group was in action. Lysander yanked himself back into his body, I did not learn until later that he had been trying to astrally find me in the fog and lead me out. White Jasmine, who had been dozing, was suddenly awake again and alert and Nightshade was pulling me out of the trace as quickly as possible. I do not remember sitting up, but even as I realized I was sitting I still had the feeling of a great weight on my chest.

After having drowned in a previous life and almost drowning in this one a couple of times before finally learning to swim in my mid to late 20’s I knew the feeling well, there was water in my lungs and not enough room for air. I was coughing, crying, and trying to get completely out of trance state but my overwhelming fear of drowning was blocking what Nightshade was trying to do to help. It was several minutes before I was able to take a normal breath and about 15 minutes before I could breathe without chest pains. I must say that drowning on one’s own couch is definitely NOT the way to go! That ended the past life regression attempts for a couple of hours.

5 thoughts on “Drowning On Dry Land…”

What do you think? We are interested in your comments, feedback, questions and ideas! Cancel reply

This site uses Akismet to reduce spam. Learn how your comment data is processed.